A new update has arrived for Subnautica: Below Zero Early Access. Uncover the mysteries awaiting you in Stranger Pings, with new clues to investigate in the abandoned Alterra bases, unlockable base decorations, improved creature behaviors, and much more. Visit the Stranger Pings website to discover more! As you investigate the abandoned Alterra bases on 4546B, you will now uncover additional environmental storytelling. Learn more about the scientists that lived and worked on the planet prior to your arrival, ranging from unlockable employee profiles, to personal items and decor. It’s even easier to know which base you’ve arrived at too, with symbols and name plates added to the exterior! Add a touch more personalization to your own bases after you root through the Alterra labs, with the futuristic Executive Toy, a calming Aromatherapy Lamp, as well as stairs for your surface bases. Never lose an Artifact in the world again! A Precursor symbol will now accompany any Artifact locations on the planet, which can all be managed through your trusty PDA. PDAs that you have previously collected during your playthrough may reappear with this update. If you have already unlocked them, you will not be able to pick it up again. We are working on a solution for the next update.

Further detail and polish work has been added to Deep Lilypads and the Iceberg Zone. Revisit these impressive biomes to discover just how rich and vivid the world is becoming. 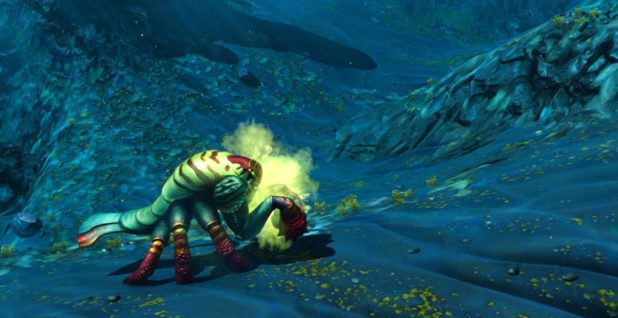 The behaviors of several creatures that inhabit the vast waters of the planet have been revamped with this update. The Rock Puncher now trawls the ocean floor in search of sustenance, which also unearths resources that you can pick through. Squidsharks utilize a new lightning attack to chase away any threats. Other creatures have also seen updates to their pathing and animations, so make sure you get out in the world and interact with them… if you dare. This feature can be found under the new Accessibility section of the menu. With a selection of colors to choose from, you’ll be able to highlight objects in the world that you can interact with.